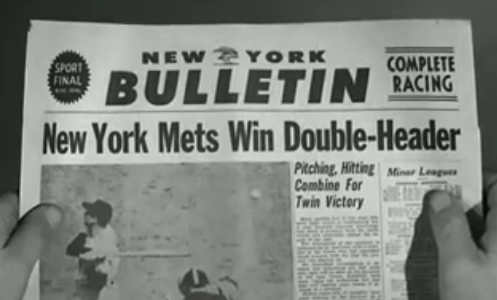 While the Wall Street Journal tries to pump up area newsstand sales and perhaps take down [1] a stolid competitor with the launch of a Greater New York [2] section, which includes the assignment of yet another Mets beat reporter (one who took on the heretofore uncovered subject of how the Mets don’t get their history right at Citi Field [3]weeks after the opening of the Mets museum, misspelling Tommie Agee’s widow’s name and inventing a statue of Jackie Robinson [4] that isn’t there in the process), the New York Bulletin cuts right to the chase by giving the Mets’ Tuesday night sweep of the Dodgers exactly the kind of play it deserves. Kudos to the Bulletin!

While pitching and hitting indeed combined for twin victory [5], it saddens me to inform you (if you hadn’t figured it out already) that the New York Bulletin, unlike the aforementioned sweep, is fictional. This front page is from the premiere episode of Get Smart, a clip of which was cleverly posted on Remembering Shea [6] this morning. Watch the first couple of minutes for the full context; I particularly enjoyed the score being reported as “99 to 86”. They couldn’t have known in 1965 how much those Mets years would have in common.

Incidentally, on September 18, 1965, the day that first episode of Get Smart aired on NBC, the Mets lost to the Cubs 4-3, dropping their tenth-place record to 47-103, slotting them a mere 42 games behind the league-leading Giants. So much for saying the ’65 Mets missed winning the pennant by that much.

EXTRA! EXTRA! The Mets have just completed a series sweep of the Dodgers, a seventh consecutive win, a 9-1 homestand and maintained their grip on first place. I can’t wait to see the Bulletin‘s evening edition.