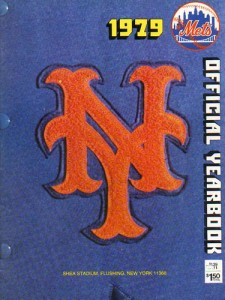 [1]Thursday night at 9 o’clock, revisit the original sign of the apocalypse when SNY airs Mets Yearbook: 1979. I realize we express this type of sentiment fairly regularly where this dynamite series is concerned, but it defies the laws of nature that somebody actually produced a highlight film from a 63-99 season that in no way, shape or form included thirty minutes of Mets highlights.

But of course we kid 1979 because we lived through it. We know Lee Mazzilli exploded into the national consciousness like a discount bag of Pop Rocks, and that Frank Taveras sped his way from first to second and sometimes third, and that one June night the Mets scored ten runs before making three outs [2]. But boy, if ever a year begged you to quit loving the Mets (besides 1977 and 1982 and 1993 and 2003 and 2009), it had  to be 1979. Most of New York heeded the call to ignore and left the rest of us plenty of legroom at de Roulet Stadium.

Tune in, if only so you can understand what Father Mulchahy meant when he told Col. Potter in the final episode of M*A*S*H, “Look on the bright side: When they tell us to serve our time in Purgatory, we can say, ‘No thanks, I’ve done mine.'”