He could have been elected mayor at this moment.

If you didn’t make it to the ticker-tape parade the City of New York threw for its World Champion New York Mets in 1969, then by all means click right here [2] for a delicious two-minute, forty-one second bite of it, courtesy of NYC Media. It’s part of a series called City Classics that combs the municipal archives for what would have to be characterized as Neat Stuff. For this episode (which I found on Channel 22 of my cable system), the fun starts at 1:10 and goes through 3:51. After that it gets kind of depressing.

They really knew how to name streets in those days.

Highlights include generous scanning of the Met-crazed crowd; a few words from John Lindsay, who had been hitching his re-election wagon to the Mets for several months; and the only man from whom the City Hall crowd really wanted to hear, Gil Hodges, who would have been voted into office immediately for anything he liked had his name been on a ballot. Gil humbly introduces the players and coaches who followed his lead into glory. 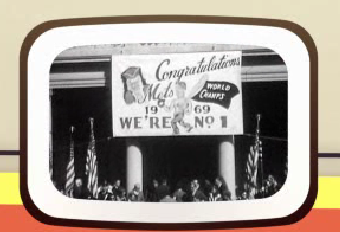 From there, we see the ticker-tape fall and the parade roll up the Canyon of Heroes. Everybody was very happy that autumn afternoon, including those of us who glimpsed it on TV in wonder as tykes. It still works as found footage. See how many Mets legends (and one villain) you can spot!

And if you’re not the type to forget ’69, then by all means visit Never Forget ’69 [4], a fine blog whose updated URL belongs on your list of Mets bookmarks.