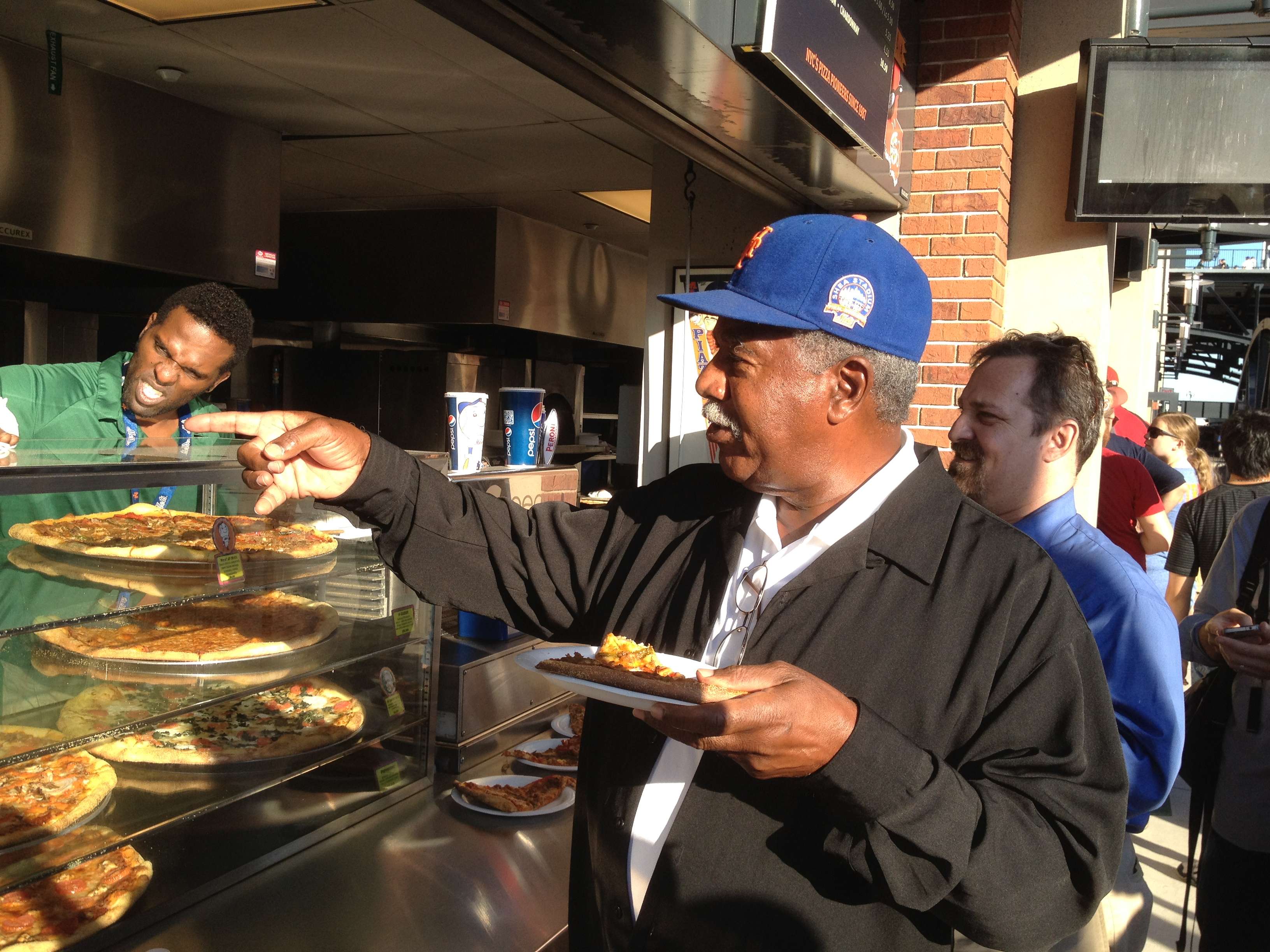 From hauling in the last out to partaking of the first slice, he’s still Cleon Jones.

9. Scott Hairston. The Man for a night, albeit a lousy night on the field [2]. But Scott’s a gamer coming off that bench where few Mets sit for long. Give ’em hell, Hairy!

8. Mike Baxter. Every conversation since June 1 is better because I can use the phrase “since the no-hitter” or words to that effect. Two weeks and I haven’t fully come down. Why should I? That’s all Baxter’s doing (well, his and Johan’s). Hoping the getting better is proceeding. And I hope I never receive another offer for a reprinted $50 ticket [3] for a game for which I turned down a real one of lesser face value.

7. Dave Kingman. A visitor to four positions as a Met, a fixture at none, but when I envision Dave Kingman The First Time, I definitely see him as a left fielder. That tenure ended 35 years ago yesterday, June 15, 1977 [4], which is hardly ever remembered as The Day Dave Kingman Was Traded.

5. Cliff Floyd. I thought of Cliff as Rob Emproto and I discussed David Wright’s Met future in one of the nine innings in which the Mets looked hopeless Friday night. I wondered if the Mets’ bush-league appeal [6] of the one hit in R.A. Dickey’s one-hitter might be remembered by David at contract time the way the mob remembered Tommy’s unauthorized whacking of Billy Batts in GoodFellas, though I agreed that ultimately money talks and nobody walks. Anyway, this got me thinking about how David has spent so many postgame media scrums as the sole go-to guy and how he’s often been left to explain away Met misfortunes and I remembered what a nice relationship Cliff and David seemed to have in David’s early days, and I began to miss ol’ Cliff.

4. REO Speedwagon. Pretty left field choice for a postgame concert in Flushing, Queens, New York in 2012, no? But they rocked…THEY ROCKED! per Beavis. I was glad to see and hear them as was Rob, who’s an ace classic rock guy in addition to being a baseball wise man. I get the group that gave us You Can Tune A Piano, But You Can’t Tuna Fish is not everybody’s cup of early ’80s tea, but what I didn’t get pre-Friday was how their impending Citi Field presence inspired so much snark of the “who can even name an REO Speedwagon song?” variety. Well, there was “Keep On Lovin’ You,” which was played every six minutes during my three final high school months. And there was “Keep The Fire Burnin’” which was on my car radio frequently as I drove back to Florida for my sophomore year of college. And there was “Roll With The Changes,” which received a recurrent life on multiple FM formats once Hi Infidelity hit. And there was überballad “Can’t Fight This Feeling,” which spent three weeks at No. 1 as winter 1985 became spring 1985. Turn your nose up at the Wagon if you must, but never be proud of not knowing something.

2. Bernard Gilkey. His 1996 star turn as Mets RBI machine is vaguely recalled, but everybody remembers his 1997 Men In Black cameo.

1. Cleon Jones. Holy fudge, I stood right next to Cleon Jones as Cleon Jones took a bite of a slice of pizza named for Cleon Jones and when Cleon Jones wasn’t enjoying his Cleon Jones pizza, Cleon Jones was answering questions about 1969 being posed to him by a small cadre of shall we say senior bloggers (within a somewhat larger cadre of bloggers of all ages) that included me, and again I was reminded of how helpful it is to shed one’s cynicism and allow oneself to be impressed should the impulse present itself.

Brother, was I impressed to be standing inches from Cleon Jones.

See, he’s Cleon Jones, who hit .340 for the World Champion Mets and caught the ball that ensured they’d forever be referred to as such. I’m me, some little kid watching on a tiny Sony as it unfolded, except now I’m older, apparently. Yet on a Friday night in the same general vicinity where that catch was made a mere 42 years and eight months ago, we came into a proximity measured in inches and bridged by baseball. Cleon talked about Gil Hodges, Donn Clendenon, challenging for a batting title, being hit by Dave McNally, dealing with a midseason injury on a slick Shea surface and Gil Hodges some more, of whom he seems particularly fond still.

As it happened this Blogger Night, my little pastime here brought me into contact with Jerry Koosman and Edgardo Alfonzo (along with Cleon they helped City Harvest [7] do a good deed, repacking sweet potatoes for NYC food pantries on Mets Plaza); Kooz again, this time with R.A. Dickey (meeting as scoreless inning maestros); top draft picks Gavin Cecchini and Kevin Plawecki (your Mets of tomorrow, tasting a bit of their future [8] yesterday); and Randy from The Apple [9] and Joe from Mets Merized Online [10] (two of the many nice folks within the blogger cadre brought together by Mets media relations). Plus I was hooking up with Rob a little later for the actual game plus concert.