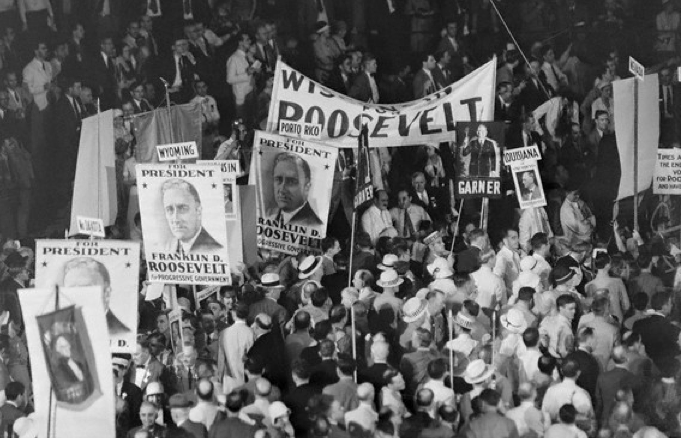 “There’s nothing to fear but Faith and Fear itself!”

Just as I’m the kind of fan who sticks it out at Citi Field to the ninth inning when the Mets are down by ten, I’m the kind of political junkie who stays tuned to C-Span after the prime time speeches and watches every bit of the alphabetical convention roll call clear through Wyoming, even though it’s to confirm a nomination that’s been a foregone conclusion for nearly four years. I love convention roll calls. I love 56 state/other delegations introducing their votes with the most grandiose homages to their natural resources and elected officials. I love that when Wyoming finishes the process and the gavel comes down from the podium, there are as many people in the convention hall as there are at Citi Field when it’s the ninth inning and the Mets are down by ten.

I love convention roll calls so much, that it makes me wonder what they would be like if they took place in other settings.

“Madam Secretary, the great Promenade Section 514, home of Citi Field’s most sweeping vista, a view that provides visual proof of almost the entire outfield … where for a relatively reasonable price a fan can stare down and gaze directly at the backs of catchers like Josh Thole, Mike Nickeas, Rob Johnson and the latest addition to our glorious backstop corps, Kelly Shoppach … home to regulars like the guy who calls attention to himself with his exaggerated ‘STRUCK HIM OUUUUUUT‘ affectation while never, ever cracking a smile and often evincing a surprisingly sour outlook on life.

“Madam Secretary, Promenade Section 514, where the same small but obstinate puddle of water has greeted ticketholders at the apex of its stairs since the beginning of the 2010 season … an area of seats so conveniently located to the Promenade food court that it is possible to purchase a slice of moderately warm Two Boots pizza between the top and bottom of a middle inning and not miss a pitch … with immediate access to not ONE but TWO men’s rooms … and not ONE but TWO ladies’ rooms.

“Madam Secretary, the section where wandering fans from the first and third base sides who paid less for their tickets can join us and feel comfortable in late-season blowout losses because there will almost ALWAYS be rows of empty seats if they are willing to make the inspirational climb upward and there will NEVER be a hint of maroon-shirted security to stop them … where Citi Field’s subtle overhang provides vital protection against steady rains not considered hard enough to delay game action but steady enough to get you wet.

“Madam Secretary, the proud denizens of Promenade Section 514 enthusiastically cast all of their votes for the next Champions of the National League East, the New York Mets!”

“We are the men and women who populate the heart of the right field stands.

“It is we who noticed Giancarlo Stanton in April and derisively reminded him for the next nine innings that his name used to be MIKE!

“It is we who, when given vocal access to Bryce Harper in July, took great care to inform the 19-year-old phenom that he SUCKS! when fans in every other stadium were telling him otherwise.

“It is we who inhale the intoxicating aroma of the Catch of the Day fried flounder sandwich while its patrons wait and wait for their orders to be prepared.

“Section 101 is where the Mo’s Zone meets the Pepsi Porch, where visiting relievers are routinely heckled, where line drive home runs smashed by opposing players are returned to the field of play in the hope that the tallies they represent will someday be taken off the scoreboard.

“It is Section 101 that proudly hosted a Xerox Business of Baseball segment from SNY’s beloved roving reporter Kevin ‘Guys!’ Burkhardt when he wanted to share a heartwarming anecdote about Rule 5 selection Brad Emaus shortly after his first major league appearance and shortly before he was returned to the Toronto Blue Jays.

“It is that kind of warmth that visitors to Section 101 will find 81 times a year, and we invite all who decide not to buy anything in the ’47 Store or the World’s Fare Market and instead wander aimlessly during a 7-2 drubbing to stop by and share in our hospitality.

“Madam Secretary, Section 101 unanimously casts its votes for the descendants of the Amazin’ Mets of 1969, the dominating Mets of 1986 and all the Mets from the 23 Met seasons when Met wins outnumbered Met losses — the 2012 New York Mets!”

“Madam Secretary, hello — or ‘aloha’ — from Promenade 538, Citi Field’s Gateway to the Sky. We who sit in the most distant of the left field Promenade sections may be few in number but we who have put down roots in our wide open spaces make up for what we lack in quantity with irony.

“We could sit most anywhere in the ballpark, Madam Secretary, but we choose to be the fans in the last section you see as you mindlessly look around and start to count how many people just like you and your family have decided to spend an evening at a so-called ‘meaningless’ ballgame in September.

“We of 538 believe there is meaning in every ballgame and there is irony to be mined in our seating location.

“It is we of 538 who are the children and grandchildren of those who sat in Section 48 at Shea Stadium until the ushers kicked them out and told them, ‘the Upper Deck is closed, move your asses somewhere else.’

“It is we of 538 who know more intimately than most the flight paths to LaGuardia Airport of nearly every major carrier in the continental United States.

“It is we of 538 who really should have parked closer, because even though there aren’t many fans in many sections most of the time, and hardly any fans in our section ever, it still seems to take forever to get out of this place from where we sit.

“Madam Secretary, it is mostly without irony that we declare as our fondest hope that someday seats in our section will be in demand more than four times a year and that that time of year is in October, though on the other hand, we really do enjoy the two-dollar seats we are able to acquire on StubHub, which even with the service charges they lay on are quite a deal compared to going through the team’s Web site.

“Madam Secretary, it is almost completely without irony that the sparse delegation from Promenade 538 casts its handful of votes for baseball’s next powerhouse, the New York Mets.