If a manager and a general manager fall in the forest of rumors [1] and you don’t hear it, did it happen? If the buzz surrounding a potential double-dismissal [2] drowns out the noise from a walkoff home run, did the dinger make a sound? And if you’re standing in a deserted dugout after batting practice has been cancelled, are you still watching one of the game’s best pinch-hitters put on a show?

Philosophical questions all, and not necessarily answerable. Maybe they’re not supposed to be. But I do know a few things more than I knew before I headed to Citi Field on Friday.

I do know it rained a lot on Friday morning — the rain that didn’t fall Thursday night [3] arrived with a vengeance — and then it spritzed late Friday afternoon. The disruption in the calm after the storm is relevant because the Mets were hosting Blogger Night II. Since the first one (detailed here [4] and here [5]) represented such a great moment in communications outreach toward our branch of quasi-media, every effort was made to schedule a second one. Well, the second one kept getting rained out. This was the third attempt to have us return for BP. But because of the rain, there was no BP. If there’s no BP on the field, is there Blogger Night II?

I do know there was, thanks to some fast and professional thinking. Stripped of the opportunity to interview players before and after they took their swings, our Met contact produced a Met swinger for us, bringing Chris Carter out of the clubhouse and into our midst. We — Caryn Rose from Metsgrrl [6], Kerel Cooper from On The Black [7] and I — took turns firing questions at him, and he handled them like he handles Derek Lowe (Chris Carter’s average versus Derek Lowe: .600).

I do know Chris Carter likes to “get a good sweat going” as part of his preparation for pinch-hitting. He’s watching everything, he’s moving everywhere, he’s “not idle”. Chris Carter has 18 pinch-hits this season. What else is there to say for him than Sweat’s Go Mets!

I do know Chris Carter thinks New York fans are “intelligent,” “passionate,” “understand the game” and “deserve a winner”. That’s nice of him to say, and I got the sense he believes it. Talk to Chris Carter for a few minutes, and you get the sense he doesn’t say anything he doesn’t believe.

I do know Chris Carter has his limits in his assessment of our brilliance. I asked what in particular we, as fans, might not understand about the game. If he were texting his answer, it would have been ROTFL! See, when we say things like “just throw strikes,” it tickles him a little because throwing strikes on command is kind of difficult. Throwing effective strikes on command is rather impossible. That’s why the Roy Halladays of the world are so rare — though against Chris Carter (2-for-2 off Halladay), he’s a dime a dozen.

I do know Chris Carter has a mind of our own. Before he returned to his preparation, I wondered who he liked in the coming playoffs: Halladay’s Phils? Lowe’s Braves? Someone else? Chris Carter suddenly lost all traces of ROTFL! and turned dead serious: “I just think Mets.”

I do know I like the way Chris Carter thinks.

I do know I had a good day speaking to Mets. I spoke to Carter, and that was terrific. I also spoke to Josh Thole, if we expand the definition of speaking to the smallest of small talk. This was when Kerel, Caryn and I were loitering in the empty dugout waiting for somebody or something to happen. The first person we saw who wasn’t a groundskeeper was Thole, emerging from the clubhouse to grab a bat so he could get his own sweat going in the indoor cage. As he walked by, I said, “Hi Josh,” which sounds like a West Wing drinking game in which you down a shot of Johnny Walker Blue every time Brad Whitford [8] strides purposefully down the hall en route to the Oval Office, but I meant what I said. “Hi Josh.” And Josh Thole acknowledged me in kind with a slightly distracted “hello” in return.

I do know I approve of Josh Thole’s distractions. When I saw him under Blogger Night circumstances in July, he was the epitome of happy-go-lucky, bouncing a baseball from the track to the dugout to the clubhouse. It was sunny then. It was raining now. Josh Thole’s mood had turned with the weather. Or he was just busy. Whatever. Point is he took his swings in the cage and then he took the biggest swing of the night in the tenth. When Thole became the third Met catcher of the season to launch a walkoff home run [9], we could all say “Hi Josh,” and take our biggest swig of the night from the keg of glory.

I do know there’s no substitute for victory, but if you need one, proximity to players is pretty darn good. I’m not talking about us chatting up Chris Carter or me helping to focus Josh Thole. I mean how happy it makes any Mets fan to be in contact with a Met. While we bloggers stood and watched (and you really can observe a lot by watching), a championship team of Commack youth leaguers was led onto the damp warning track between home and the Mets dugout. There was nothing for them to do either, but they didn’t care; they were on the same field big leaguers use. And when they saw one — R.A. Dickey — they called him over with a hearty “HI R.A.!”

I do know I couldn’t be higher on R.A. Dickey after observing him make a beeline for those youth leaguers, signing autograph after autograph for every kid straining toward him from behind a barrier. I’d say I smiled a whole lot when R.A. Dickey made those kids’ day, except I assume R.A. Dickey would craft a better phrase [10]to describe their reaction. A little later, we were tipped off that something special was going to happen in the Rotunda. To thank all those who trudged through the drizzle to bear witness to Mets, Nats and other things, the club sent Dickey, Mike Pelfrey and Jon Niese to say “Hi fans!” Think three uniformed ballplayers don’t draw a crowd and elicit excitement? Think again.

I do know Mets fans love their Mets, no matter how much we complain about the Mets. My example of the evening came when Niese lagged slightly behind the Pelfrey-Dickey entourage. While his fellow pitchers were surrounded by security and public relations, for an instant Niese was all by himself. A man walked up to him, patted him on the shoulder and told him, “Jon, great job!” Jon thanked him and the man moved on, but I contemplated the scene. It’s quite possible that same fan watched Niese the other night fizzle out against the Brewers the way he’s been fizzling against everybody of late. It was a long season for Niese and I think he ran out of gas. He hasn’t been great recently, and I’m thinking the guy who told him he was didn’t think so when he last saw him on TV. But screw that, y’know? There’s a Met, he was at least good earlier in the season, sometimes outstanding, and now he’s standing right next to a regular person. That indeed makes Jon Niese great…which is pretty sweet.

I do know from first-hand experience that those Delta Club Platinum/Gold seats you see on TV are, in fact, pretty sweet, too. In the spirit of “when it rains, it pours” (less weather reference than a nod to Thursday night’s [11]30 Rock [11]) I got a call from a friend of mine who had an extra ticket Friday. I told him I was already going to be at Citi Field for Blogger Night II, but I’d hook up with him and maybe spend an inning with him. Turns out his extra ticket was one of those cushy seats we see so often unoccupied on SNY. I didn’t leave it unoccupied for long, and there is screen-capture evidence accompanying this article to prove it. 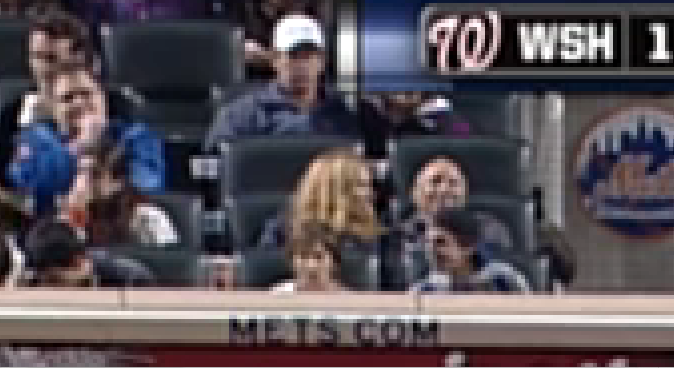 At left in blue, observing a lot by watching from up close.

I do know once you’re in the cushy seats, you spend more than an inning there. Apologies to my blolleagues Caryn and Kerel for kind of ditching them once I was invited to see how the other one-tenth of one percent lives. The Delta Club has a fantastic view of things like walkoff homers and home plate celebrations. It also has its own secret lounge that offers complimentary soft drinks and snacks (which seems appropriate given the cost of the seats). For example, they have help-yourself pretzels in there. At least they’re supposed to. I was in the secret lounge for a half-inning and — I’m not making this up — the pretzels weren’t ready. My de facto Citi Field consumer watchdog role doesn’t necessarily extend to the big-time swells sections, but I am compelled to report that no matter where you go in this Met life of ours, it seems inevitable that at some juncture, in some corner, the pretzels [12]…or the knishes [13]…or something isn’t ready.

I do know plenty of hot dogs, plenty of peanuts and plenty of hospitality was available in the secret lounge; don’t cry for the Delta Club, Argentina. And please remind me to time my future interviews with Chris Carter to coincide with surprise detours to the cushy seats. As Jenna told Liz, when it rains, it pours.

I don’t know exactly what’s going to become of Omar Minaya and Jerry Manuel. I really don’t, though the monitors featuring the pregame show blared the news that our skipper and his skipper are doomed. This is according to “sources”. There was no actual announcement about their fate, but “sources” say it’s coming. Other sources [14] caution nothing has yet been decided, but if it’s coming, it will get here soon enough. At that point, it will be the biggest thing I notice. At this point, in the calm before that storm, I’m still noticing what a considerate sort Chris Carter is; what a promising swing Josh Thole has; what a cognizant soul R.A. Dickey possesses; what a good idea it was to introduce three starting pitchers to hundreds of arriving fans; how much grown-up baseball players mean to little kids; and how much little courtesies mean to grown-up baseball bloggers.

I do know it’s been a subpar season and that disappointments abound all about the Mets. But I also know we’re disappointed only because at any given moment we’re capable of the kind of elation that occurs strictly from being the kind of Mets fans Chris Carter swears we are.

Even if the elation isn’t ready.