We are in receipt of your book proposal, The Curiouser Case of R.A. Dickey and regret to inform you it does not suit our needs at this time.

While your lead character R.A. Dickey is richly drawn, and his backstory is potentially appealing, we here at Limited Imagination agree there is no way he could exist. Since you insist on setting Dickey within the milieu of major league baseball, there needs to be at least some semblance of reality attached to your protagonist, and quite frankly, your Dickey may be the least fathomable sports character we’ve ever read. 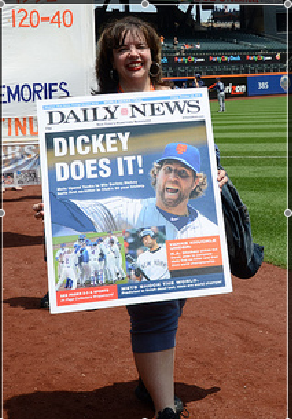 According to our research department, most successful baseball pitchers attain a level of peak performance in their 20s, but your Dickey is supposedly a career journeyman derailed by the lack of an essential component in his throwing arm who attempts to learn a magic pitch in his 30s, takes years to master it and then, quite suddenly, takes it to a whole other level where he becomes all but impossible to hit. The sports reader may “root” for the unexpected, but that demographic is more and more grounded in statistical probability and the Dickey you describe in the latter chapters begins to do things that sound impossible.

We could accept a certain literary license in making Dickey fairly articulate [1] as a contrast to the usual ballplayer, but having him write a searing memoir [2] that lands on the New York Times bestseller list in advance of creating this pitching alchemy again stretches credulity (though I did chuckle at the idea of “R.A. Dickey” signing his book at a museum named for Yogi Berra [3] — quite clever). More troubling is your climactic scene in St. Petersburg where your protagonist has the night of his professional life [4].

Where to begin with what’s wrong with this?

• First, you mention his team, the New York Mets, has recently had a no-hitter. Longtime baseball fans will immediately detect the inaccuracy there.

• Second, your key moment in the telling of the big game happens way too early. The first inning, Mr. Plimpton? And having the team’s All-Star third baseman make the mistake? That seems to be pushing it.

• Next, Dickey goes on to set a team record [5] in the middle of all this. You might want to rethink pouring on so much melodrama.

• Also, the part where you have Dickey’s masterpiece disturbed once more by the same third baseman…you might want to do a little fact-checking to see if that is even possible.

• Finally, the aftermath of the one-hitter seems just plain bizarre. You have Dickey’s manager insisting the team will challenge the scorer’s big decision [6], and Dickey having the presence of mind to use a word like “purview” in his live postgame TV interview, and for some reason you layer on top of this a perfect game pitched across the country hours later [7] by the same pitcher who once “beaned” the star-crossed star third baseman who made the two bad plays to cost Dickey his own bid at perfection.

Your conclusion carries with it its own set of holes. Where you indicate Dickey’s perfect game not being a perfect game is beside the point because the bigger victory is that he’s pitching so incredibly well throwing the magic pitch [8] that maybe next time he’ll throw the perfect game — and even if he doesn’t, a string of shutouts and near-shutouts that are on par with what the best pitchers in his team’s history have done is plenty?

No disrespect, Mr. Plimpton, but we here at Limited Imagination Publishing wonder if you have any concept of telling a good sports story.

Nevertheless, we do see some promise in certain elements of The Curiouser Case of R.A. Dickey. I would suggest that instead of making him an intellectual Southerner who struggled for years in the minor leagues before emerging as a sensation in New York, you convert him to a different kind of protagonist. He could have an Eastern religious bent along the lines of Hermann Hesse’s Siddhartha. Since they have nicknames in baseball (by the way, “R.A.” isn’t much of a baseball name), you could shorten “Siddhartha” to maybe Sid. Or Sidd, even. I was thinking about how you worked Berra into your proposal, so let’s say He’s A Pitcher, Part Yogi And Part Recluse; Impressively Liberated From Our Opulent Life-Style, Sidd’s Deciding About Yoga [9] — and his future in baseball.

This is just something that springs to mind. Hmmm, “springs”…say, here’s another suggestion: you may want to set your story in spring training. You already have the Mets in Florida. Maybe you can check and see if the Mets ever trained in St. Petersburg and play off that location (but in a venue more interesting than a domed stadium, which I’m pretty sure they don’t even have in baseball anymore; placing the action in the middle 1980s might solve that problem, but that’s up to you). St. Pete might be fertile ground for “Sidd” to do eccentric things like play the French horn and throw the baseball outlandishly hard.

Admittedly, it’s a little off the charts, but the idea that a fictional pitcher can get batters out with devastating fastballs at least seems, as they say, in the ballpark. This “R.A. Dickey” and his magic pitch that nobody’s ever thrown the way he’s throwing it in your book?

Honestly, Mr. Plimpton [10], who’s going to believe that could happen?